"The microservice architectural style is an approach to developing a single application as a suite of small services, each running in its own process and communicating with lightweight mechanisms, often an HTTP resource API. These services are built around business capabilities and independently deployable by fully automated deployment machinery. There is a bare minimum of centralized management of these services, which may be written in different programming languages and use different data storage technologies."

It is expected that in 2020, the global cloud microservices market will grow at a rate of 22.5%, with the US market projected to maintain a growth rate of 27.4% [5]. The tendency is that developers will move away from locally hosted applications and shift into the cloud. As a consequence, this will help businesses to minimize downtime, optimize resources, and reduce infrastructure costs. Experts also predict that by 2022, 90% of all applications will be developed using microservices architecture [5]. This article will help you to learn what microservices are and how companies have been using it nowadays.

Microservices have been widely used around the world. But what are microservices? Microservice is an architectural pattern in which the application is based on many small interconnected services. They are based on the single responsibility principle, which according to Robert C. Martin is "gathering things that change for the same reason, and separate those things that change for different reasons" [2]. The microservices architecture is also extended to the loosely coupled services that can be developed, deployed, and maintained independently [2].

Moving away from the monolithic architecture

Microservices are often compared to the traditional monolithic software architecture. In a monolithic architecture, a software is designed to be self-contained, i.e., the components of the program are interconnected and interdependent rather than loosely coupled. In a tightly-coupled architecture (monolithic), each component and its associated components must be present in order for the code to be executed or compiled [7]. Additionally, if any component needs to be updated, the whole application needs to be rewritten.

That's not the case for applications using the microservices architecture. Since each module is independent, it can be changed without affecting other parts of the program. Consequently, reducing the risk that a change made to one component will create unanticipated changes in other components.

Companies might run in trouble if they are unable to scale a monolithic architecture in case their architecture is difficult to upgrade or the maintenance is too complex and costly [4]. Breaking down a complex task into smaller components that work independently from each other is the solution to this problem. 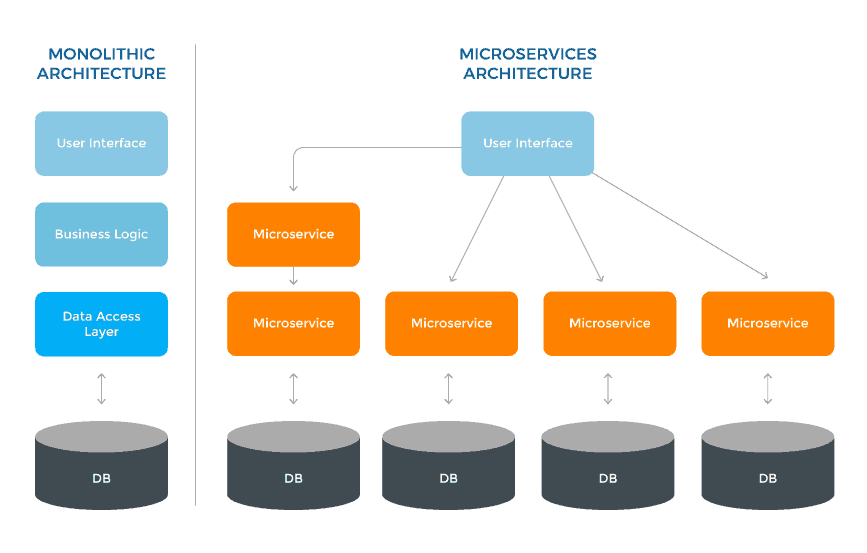 Pros, cons and how developers around the world build their microservices

As observed on the table, most experts are happy with microservices for solving scalability issues. On the contrary, maintenance and debugging seem to be a challenge for them.

According to their architecture's main technologies, most experts reported that they use Javascript/Typescript (almost ⅔ of microservices are built on those languages). In the second place, they mostly use Java.

Although there are plenty of options to choose to deploy microservices, most experts use Amazon Web Services (49%) followed by their own server. Additionally, 62% prefer AWS Lambda as a serverless solution.

Most microservices used by the experts use HTTP for communication, followed by events and gRPC. Additionally, most experts use RabbitMQ for message-brokers followed by Kafka and Redis.

Also, most people work with microservices continuous integration (CI). In the report, 87% of the respondents use it by using CI solutions such as GitLab CI, Jenkins or GitHub Actions.

Finally, most people think that microservice architecture will become either a standard for more complex systems or for backend development.

Many companies have changed from monolithic architecture to microservices.

In 2001, with development delays, coding challenges, and service interdependencies didn't allow Amazon to meet the scaling requirements of its growing user base. With the need to refactor their monolithic architecture from scratch, Amazon broke its monolithic applications into small, independent, and service-specific applications [3][9].

In 2001, Amazon decided to change to microservices, which was years before the term came into fashion. This change led Amazon developing a number of solutions to support microservices architectures, such as Amazon AWS. With the rapid growth and its adaptation to microservices, Amazon became the most valuable company in the world, valued by market cap at $1.433 trillion on July 1st, 2020 [8].

Netflix started its movie-streaming service in 2007 and by 2008 it was suffering scaling challenges. They experienced a major database corruption and for three days they could not ship DVDs to their members [10]. This was the starting point when they realized the need to move away from single points of failure (e.g. relational databases) towards a more scalable and reliable distributed system in the cloud. In 2009, Netflix started to refactor their monolithic architecture into microservices. They started by migrating its non-customer-facing, movie-coding platform to run on the cloud as an independent microservices [11]. Changing to microservices allowed Netflix to overcome its scaling challenges and service outages. Despite that, it allowed them to reduce costs by having cloud costs per streaming instead of costs with a data center [10]. Today, Netflix streams approximately 250 million hours of content daily to over 139 million subscribers in 190 countries [11].

After launching Uber, they struggled to develop and launch new features, fix bugs, and rapidly integrate new changes. Thus, they decided to change to microservices and they broke the application structure into cloud-based microservices. In other words, Uber created one microservice for each function such as passenger management, and trip management. Moving to microservices brought Uber many benefits, such as having a clear idea of ownership of each service, which boosted speed and quality; facilitating fast scaling by allowing teams to focus only in the services they needed to scale, updating virtual services without disrupting other services, and achieving more reliable fault tolerance [11].

It's all about scalability!

A good example of how to provide scalability is by looking at China. With its huge number of habitants, China had to adapt by creating and testing new solutions to solve new challenges at scale. Statistics show that China serves roughly 900 million Internet users nowadays [14]. During the 2019 Single's Day (equivalent of Black Friday in China), the peak transaction of Alibaba's various shopping platforms was 544,00 transactions per second, and the total amount of data processed on Alibaba Cloud was around 970 petabytes [15]. So, what's the implication of these numbers of users in technology?

Many technologies have emerged from the need of addressing scalability. For example, Tars was created in 2008 by Tencent and contributed to the Linux Foundation in 2018. It's being used at scale and enhanced for 10 years [12]. Tars is open source and many organizations are significantly contributing and extending the framework's features and value [12]. Tars supports multiple programming languages, including C++, Golang, Java, Node.js, PHP, and Python; and it can quickly build systems and automatically generate code, allowing the developer to focus on the business logic to effectively improve operational efficiency. Tars has been widely used in Tencent's QQ, WeChat social network, financial services, edge computing, automotive, video, online games, maps, application market, security, and other many core businesses. In March of 2020, the Tars project transitioned into the TARS Foundation, which is an open source microservice foundation to support the rapid growth of contributions and membership for a community focused on building an open microservices platform [12].